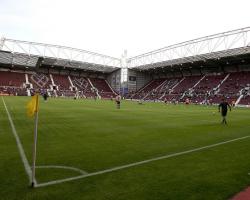 Hearts 4-1 Falkirk: Match Report - view commentary, squad, and statistics of the game as it happened.Jambos keep on winningHearts kept up their impressive start to the Scottish Championship after thrashing Falkirk 4-1 at home, despite finishing the match with 10 men.The Jambos have now won all four games in the second tier, scoring 12 times in the process.Defender Jordan McGhee nodded the hosts in front 17 minutes in from a superb Billy King corner.And King himself made it 2-0 moments later when he reacted quickest after striker James Keatings' penalty was saved

Midfielder King had his second midway through the first half after slotting in a pinpoint Keatings cross to give Hearts a 3-0 advantage before the interval.However, Prince Buaben was given a straight red card on 72 minutes for a dangerous two-footed lunge on Falkrik's Scott Durojaiye

The Jambos were awarded another penalty, though, and striker Osman Sow calmly rolled this one home to make it four.Botti Bia Bi grabbed one back for Falkirk late on after reacting quickest in the box