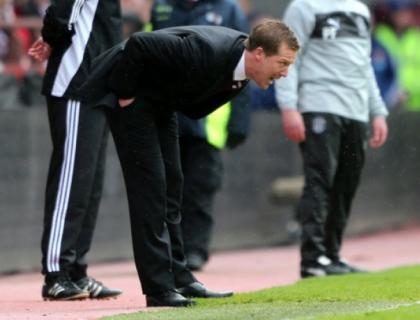 
A scrappy contest, played in abominable conditions in Edinburgh, was effectively decided when McKay showed typical intelligence and composure to find the opening goal on the hour.


With Inverness buoyed by the opener, McKay and Graeme Shinnie could have made the scoreline far more comfortable, while Jamie MacDonald denied Aaron Doran with a spectacular save.


However, the visitors' lead was eventually doubled with a scintillating counter-attack, with Marley Watkins surging from the halfway line before finding McKay, who slotted home his second of the game.


The triumph - Hughes' first ever league win at Tynecastle as a manager - ensures the Highlanders continue to lead the pack behind Celtic, three points ahead of rampant Dundee United.


Hearts, conversely, look utterly doomed at the foot of the table. The injury-hit capital club are still 14 points adrift of Ross County and, with memories of their 7-0 hammering in the Scottish Cup still raw, travel to face Celtic next week.


The paper-thin nature of Hearts' administration-ravaged squad was laid bare on the team-sheet, with Sam Nicholson and Gary Oliver, both 18, making their first ever league starts for the Jambos.


Ryan Stevenson, who will be out until at least January with a hamstring tear, and Jordan McGhee dropped out from the side which suffered a 4-1 defeat against Dundee United last week.


Hughes, a boyhood Hibernian supporter and former Easter Road player and manager, chose the home of his old foes to make his first appearance in the dugout, having watched the previous week's draw at St Mirren from the stands.


Seeking his first win since replacing Terry Butcher in the Highland, he named the same side which recorded the stalemate in Paisley.


Amid miserable conditions in the capital - with incessant rain and a sporadic gale - Inverness were first to threaten, with Watkins forcing a fine point-blank save from MacDonald after a deep Doran cross found him at the back post.


Hearts were tidy in possession, but the far more experienced Inverness side were looking the more incisive in attack, and Shinnie was next to threaten, flashing a powerful drive just wide from 25 yards.


Hearts stopper MacDonald ensured the scored remained level at the break, producing a fantastic save to deny Doran's fizzing drive from outside the box before the excellent Shinnie shot wide from the resulting corner.


The home side started the second half brightly, with David Smith, on to replace a hobbling Jamie Walker at the break, skimming a low free-kick off the sodden turf and just wide of Brill's right-hand post.


However, Locke's Hearts were broken on the hour, with McKay finding the net.


The Northern Ireland international was ice-cold inside the box as he stepped inside the flailing challenge of Jamie Hamill, before curling a superb finish past MacDonald.


Hearts looked to visibly wilt after going behind and Inverness could have ultimately run up a handsome tally.


Shinnie flashed a superb shot just wide after Nicholson was robbed inside his own box, before the irrepressible McKay swivelled inside the area and struck the base of the post.


With Locke's side swarming forward in search of an unlikely equaliser, Inverness made the game safe on the break thanks to the speed and vision of Watkins, allied with the dead-eyed finishing of McKay.